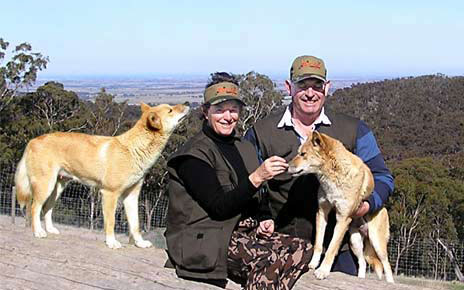 After a lifetime obtaining all of the qualifications and successes available in the world of breeding, exhibition and judging of pure bred dogs, its proprietors, Lyn Watson and (her late husband) Peter Watson, resolved to concentrate on the preservation of the Australian dingo, particularly of the remnant gene pool of the alpine dingo ecotype, which is now scientifically documented and accepted as facing extinction in the wild.

The Watson’s were responsible for amendments to legislation, and thereby bringing about legal ownership of dingoes by Victorian citizens back in 1992 under the CALP Act. Since that time they have held the required Department of Primary Industries (DPI) permit, and currently a DSE Wildlife Permit. For decades they have campaigned to have the dismal plight of the dingo in the wild brought to the attention of politicians and the public, and for the species to be removed from pest lists to threatened species lists under the Flora and Fauna Guarantee Act. All criteria for this have been met in Victoria.

In October 2008 the Victorian minister for environment Hon. Gavin Jennings, announced the status of the dingo as officially “endangered”. Three state acts of parliaments must now be amended to create a smooth transition from “Vermin” to “Wildlife”.

On October 1st 2010, Governor in Council declared the dingo (Canis dingo) to be “unprotected wildlife in the State of Victoria”.  Only captive pure dingoes are currently protected.

With the bequest of the sanctuary property to The Australian Dingo Foundation the pure dingo gene pool may continue in perpetuity at the Dingo Discovery Sanctuary and Research Centre.